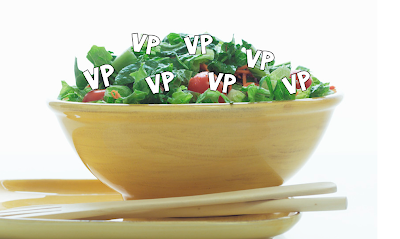 "Welcome to the show where everything's made up and the points don't matter," Drew Carey was famous for saying at the introduction of the hit improv comedy series, Who's Line is it, Anyway? Lately, I've thought that this same phrase could apply to the that niche-within-a-niche in the boardgame market: complex Eurogames. Afterall, the exotic themes often have much less to do with the mechanics than simply to add a little color to the graphic presentation, and the points...well, there's so many of them to be had, that I can often hear Carey's voice in the back of my head each turn, exclaiming with a smile, "A thousand points for everyone!"

In the comment section of a review of prolific game designer Stefan Feld's newest gamer's game, Bora Bora, Ben McJunkin of the Opioniated Gamers used the term "Point Salad" to describe what has become a popular scoring mechanism in these complex games:

"One source of my disagreement with Feld’s designs is the excessive use of granular and contingent points scoring. In other corners of the interwebz, I have regularly advocated for games to provide clearer feedback to players through points allocations. Ideally, good play would produce points, average play would not, and bad play would lose points. In most of Feld’s games, I find it too easy to get complacent with suboptimal moves, since even bad choices result in the game effectively shouting, “Good job! Here, take another handful of points.” While those who enjoy and excel at Feldian designs can rightly make the point that part of the game’s skill comes in puzzling out the difference between “a handful of points” and “the biggest handful of points,” I generally prefer games with clearer (and fewer) objectives, such that the focus is on the interplayer fight to achieve them."

Why are "point salads" popular in recent games? For the gamer, it may be psychological effect of being rewarded at every turn. As many of these games are so-called "engine-building" games, it is encouraging to see those engines producing something of value. Yes, there are any number of resource conversions at work, but ultimately, the goal is to convert these into victory points as efficiently as possible.

Tying the Game's Mechanics to it's Theme

Games are abstractions of reality, but a Point Salad game can reflect real-life rewards without the overwhelming complexity of a simulation. Agricola is an example of a game that rewards players in every area for reasons of thematic integrity.

Balancing the Game
In Germany, game balance is a priority. And for complex games that offer multiple paths to victory, balancing the various elements and strategic possibilities requires the most time and effort from the designer and developer. The Point Salad approach offers a relatively easy way of doing this. With so many points awarded for each possibility, the numbers can be quickly and simply adjusted when imbalances are discovered. Is this the "easy way out" of the problem, however, and is there a better solution?

Settlers of Catan, for example, gave us the very elegant “first player to 10 points wins.” Even Puerto Rico gave us some complex, interweaving systems while still only rewarding victory points for shipping and buildings.

Since then, game designers have moved away from this approach to Point Salad scoring, and I’m not sure our designs are better for it. Friend Peer Sylvester and I have talked about getting away from that type of game, but it wasn't until recently that I realized I was still depending on this approach with one of my new designs.  Now, after receiving criticism much like that doled out by McJunkin above, I'm overhauling the prototype in order to provide the players with much clearer goals and mechanics that allow them to better measure their progress relative to their opponents. These were the standards set by the German games of the 90's and early part of the last decade.

You might say I'm tossing the Point Salad in favor of the "Meat and Potatoes" of German game design.
Posted by Jeffrey Allers

I am noticing that point salad is being discussed on Boardgame Geek now. This article is a really good one to discuss the concept.