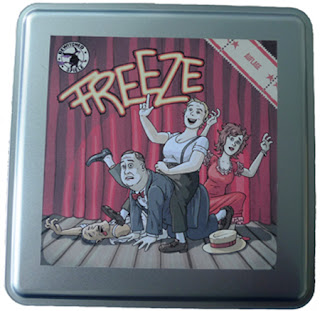 For over a decade, I've enjoyed watching improvisational comedy both live and on television. There was a time, in fact, when I was so addicted that I requested my parents send me videotaped episodes of Who's Line is it, Anyway? from the U.S. I took notes on the different improv games and situations, and soon hosted improv parties with my friends and youth group in Berlin. There was, of course, the occasional over- or under-acting among the amateurs I assembled, but I was always astounded by the creativity and humor that almost always emerged from each skit. Rarely did anything fall completely flat, and we often laughed so much, we were literally gasping for air.

I have often thought about how one could turn one of these improv games into a successful party board game and can happily report that a new game – Freeze, released at the Spiel 2010 convention – has done just that. Fellow Berlin designer Andrea Meyer has teamed up with Hans-Peter Stoll – himself an improv actor in an amateur theater group – to create what will arguably be the game most likely to draw a crowd in Essen this year.

POSTCARD FROM BERLIN #48: My Favorite Things

My latest article in the Postcards From Berlin series is up on the Opinionated Games website. It's that time of year to discuss favorite games of 2010, and I take inspiration from John Coltrane in writing about "my favorite things."
Posted by Jeffrey Allers No comments: