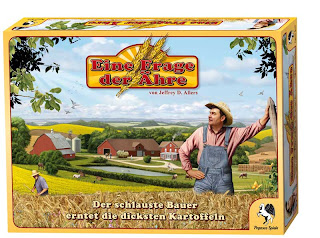 Back to the Roots: Tilling the Ground for a New Game Idea

This is a game that most certainly started with the theme: farming in the Midwest of America where I grew up, where the 1-mile-square fields of different crops look like traditional game board from an airplane.

My mother grew up on a farm, and I spent plenty of time in my childhood with my grandparents and uncle there. Planting and harvesting crops seemed like an intriguing theme for a game, especially when factoring in “crop rotation”, in which fields are planted with different crops year after year. I was interested more in designing a family game, however, something that my Iowa relatives would enjoy playing, and so I had to abstract the theme quite a bit in order to keep the rules accessible.

The Seeds are Planted

My first step was to design a board of squares with five different crops represented. Then I added domino-style tiles with two different crops on each. Players had a hand of these tiles to place on the board and form larger “fields” or chains of the same crop. But due to crop rotation, a player could never cover a crop with a tile of the same crop. The stacking of the tiles also necessitated a second placing rule, which is fairly intuitive: new tiles could not be placed over fields on different levels.

This starting framework was still one-dimensional, and very dependent on a good tile draw. More options for the players were necessary. The next layer, then, was the one or two “barnyard points” printed on each square of each tile. These allowed players to advance on a track matching that type of crop. Reaching a certain point with the markers on the track allowed a player to place a barn on the board and reserve a nicely-developed field of crops for herself. Each player had one of these “development tracks” on a player mat in front of him.

I finally play-tested the game with friend and designer Bernd Eisenstein and his girlfriend, and they were both very enthusiastic. After testing it further, however, it seemed that the barnyard tracks could offer more than just the opportunity to place the barns—they could also increase the competition in the game by providing a race to the top of each track for bonus points. These bonus tiles became the “livestock” and rewarded the first player to reach them with extra points, while the second-place player received a lesser amount.

Now that there was competition involved, it made sense to put these tracks on the board so that players could compare their positions at a glance. To make the turns more interesting, I then made it necessary for the players to choose between these barnyard points and the harvest points (or victory points) for each field.

I also added one single-square tile of each crop for each player to use at any point during the game to allow greater flexibility, in case a player could not draw the tile she needed at an important time, and also useful in “leveling out” two fields to make it possible to place a double tile there.

I was finally ready to let the “experts” in our weekly game group try it out, namely Hartmut Kommerell, Thorsten Gimmler and Andrea Meyer. I was a bit nervous, as this was only the second prototype I had ever taken to the group, where they were always playing each other’s prototypes. But it was received well again, and I had more valuable feedback to tweak the design and the courage to bring it back to the group regularly to play-test.

The last major changes in the design were the result of their feedback: randomizing the bonus Livestock Tiles a bit (but still awarding the more valuable ones to the fastest player) and keeping them hidden until the end of the game. This kept the winner of the game in doubt, adding tension and keeping the last round from slowing down too much, as players calculated and re-calculated their scores to see how they could best take the lead or keep it. And I also added an “End of Game” tile which made the timing of the final round unknown to the players. 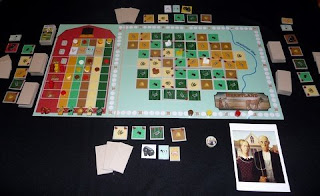 That summer I traveled to the Game Designer’s Convention in Göttingen for the first time with Hartmut, and, with his help, I was able to demo the game to several publishers who all wanted copies of the prototype afterwards. Several months later, Pegasus Spiele offered me my first game contract. Their intention was originally to publish it the following year, but several things slowed down the process.

First, they were considering producing the game in a more abstract, all-wood edition, but the prototypes received from China were not of the quality they had wanted. I was not terribly disappointed, as I preferred the more thematic approach of artwork on cardboard (perhaps I’m too “old school”) and even suggested acquiring the rights to Iowa artist Grant Wood’s famous painting “American Gothic” for the box cover.

Soon after that, a new developer at Pegasus got involved with the design and worked together with me to further tweak the game. During that time, we went ahead instead with my card game “Circus Maximus,” opting to continue developing “Heartland” until it was as good as we could make it. Then they decided on a much more German name, a play on words with the German expression (and German title of the film “A Few Good Men”) and farming terminology. “Herzland” was a term once used by Hitler to describe Russia’s bread basket, a taboo the game certainly did not need.

Still, the artwork is clearly rural America, and it has honestly been a relief to finally get the project “out the door” and into the market after all this time. I feel that the finished publication is worth the wait. 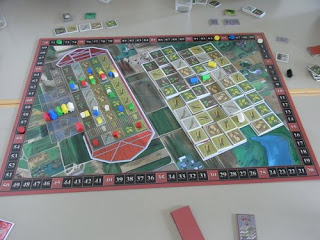