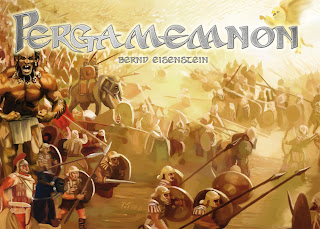 I'm not someone who becomes enamored with one particular game--or even game system. By nature, I enjoy variety, and, if anything, I like to look at new game systems more for exploring the possibilities of expanding them or changing them.  Likewise, although I like Dominion and admire the originality in the design, I was not drawn into the "deck-building" craze it inspired on both sides of the Atlantic.


My friend, Bernd Eisenstein, however, thought that the system might work with a conflict-oriented game he was working on, and soon it was the backbone of yet another game set in his favorite theme: antiquity.  It also featured another of Bernd's favorite game elements:  players starting from different positions with civilizations that have varying special powers (as in his first self-published title, Peloponnes). 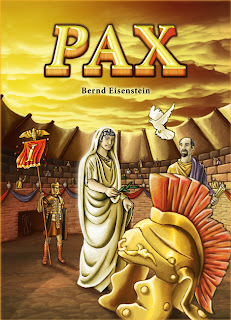 I enjoy very much the opportunity to see and play the creative game ideas that our group of designers brings to the table each week.  Some people I've met do not care too much for playing "unfinished" games that might have game-breaking flaws, but I like to see the potential in each idea, and I savor my role in providing feedback that will spur the designer on to realize that potential.
Even so, there are very few games that I get excited about after the first playing as much as this card game by my friend, Bernd Eisenstein.  In fact, I eagerly looked forward to playing the game in each iteration, and was bitterly disappointed on those evenings when he did not even bring the prototype with him.  When we did play it, we almost always played a second game back-to-back.  It's that addictive. 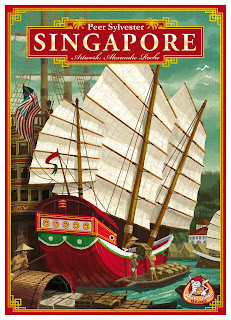 I met Peer Sylvester in 2005 and travelled to my first Game Designer's Convention in Göttingen with him that year.  Since then, we've both had our games published, and I've had the pleasure to playtest many of his ideas.  One of them, Singapore, is scheduled for release in Essen this October.  Although he brought the prototype once to the Spielwiese cafe when I was there, that night we happened to be playing on separate tables and I did not have the opportunity to play it.  Pity!  The prototype looked interesting, however, and the rules sound even more intriguing.  I'm looking forward to playing it soon.

In the meantime, Peer has posted a Designer Diary about the making of the game on Boardgame Geek News, and editor W. Eric Martin has even added a summary of the gameplay.


Posted by Jeffrey Allers No comments:

I was back home in Iowa for a recent visit, and while cleaning out the closet in my old room that still contains a few things of mine—namely, boardgames—I stumbled upon a game design artifact from my childhood. 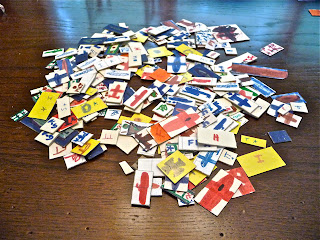 I opened the small plastic bag and dumped out the pile of hand-drawn cardboard counters, a section of a game board, a “hit” table, several dice, and a rules booklet.  It was the first game I had ever designed.

POSTCARD FROM BERLIN #50: License to Sell

In my latest article in the series on the Opinionated Gamers website, I write about the increasing popularity of marketing tie-ins between blockbuster films and toys and games.   Now, it seems to have come full circle, as toys and games are becoming the stars in their own motion pictures.

This October will be the first time I’ll finally be able to attend the SPIEL gaming convention in Essen.  Although I have yet to experience it first-hand, I’ve followed the event religiously for years, including the hype leading up to the new releases and the reports made during and after the fair by various gamers and gaming journalists.

As I last wrote, it takes some marketing savvy—especially for small publishers—to attract attention to their new games, as there are at least 600 debuted in Essen each year.  In my last blog entry, I covered some methods publishers use to create hype before the convention.  Now, I’ll list a few ways they create “buzz” at the convention, attracting the attention of the tens of thousands of hobbyists looking to fill their backpacks with new games before heading home.

If You HYPE it, They Will Come

I've been vacationing with my family in my hometown in Iowa, and recently enjoyed one of the new attractions there:  a water park on the edge of town, surrounded on three sides by corn fields.  My wife compared it to the Kevin Costner film, Field of Dreams, in which his character hears voices that compel him to build a baseball diamond in the middle of the Iowa corn fields.  The voices whisper, "If you build it, they will come."
Read more »
Posted by Jeffrey Allers No comments: