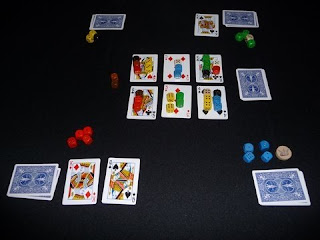 A Dice Game for 2-5 Players by Jeffrey D. Allers

Background:
Back in 2006 I heard about a game design competition on the internet for 2-player games using components that were common in every household (playing cards, dice, pawns, poker chips etc.). Each year, they also had a theme for the competition, and that year it was “dice games.” Since I had been designing games with Bernd Eisenstein, I thought it would be fun to challenge him to a “contest within the contest” to see what each of us could come up with. Castles and Crowns was one of my ideas for the competition, and although I missed the deadline for it, the game later provided inspiration for the board game Alea Iacta Est published by alea. The games are miles apart--after more than two years of development, Bernd Eisenstein's design skills and Stefan Brück's developing talents, Alea Iacta Est is much more multi-dimensional and balanced--but I feel that the original C&C is still worth offering to those looking for a game they can play with materials they already have.

4 brown dice to represent the “Mercenaries”

Beginning of each round:
Draw the top six cards from the deck and place in a row face-up in the middle.
These represent the Battlefields for the round.
Roll the 4 Mercenaries and place next to the Battlefield row.

Player Turns:
1) Roll all of your dice representing the Knights that have not yet been sent into battle
2) Then arrange the dice rolled into groups according to rank (number of pips on each die).
3) Finally, send one group of Knights (which may or may not include the Captain and Traitor) into battle by placing them on next to one of the face-up Castle or Noble Cards.

The Captain: The Captain counts as two Knights at a Battlefield. He is sent into battle in the same way as a Knight, with the exception that a Captain can never be at a Battlefield alone (or alone with a Traitor). If the Captain is the only die rolled with a certain rank, and there are no Knights matching that rank on any of that player’s Battlefields, he cannot place that Captain this turn.

The Traitor: The traitor counts as one Knight when determining the winner of a battle. He is sent to the Battlefield together with one or more Knights of the same rank, in the same way as the Captain. His position, however, is never completely secure. When the opposing player sends a group of knight(s) and/or a captain to battle matching the traitor’s rank, that player takes the traitor die from its previous location and adds it to the his group at the new Battlefield.
The traitor may change sides any number of times during the round. Each time his rank is rolled and the matching dice are sent to battle, the traitor joins them.

The Mercenary: The mercenary counts as half a knight when determining the winner of a battle (useful as a tiebreaker when players have the same number of dice at a battlefield).
When a player sends a group of Knight(s) and/or a Captain into battle that match the rank of one of the Mercenaries, that player takes the Mercenary and adds it to his group at that Battlefield. Unlike the traitor, however, the mercenary remains there until the end of the round. Note: even when there are several Mercenaries of the same rank, a player may only ever take one Mercenary per turn.

End of the Round:
When one player has sent his last Knight into Battle, or, after rolling, cannot send any of his Knights into battle, the round is played to its conclusion (up until the player with the starting player marker).
Then the round ends and the winners of each battle are determined.
The player with the most Knights at each Battlefield wins that Castle or Noble card. (Captains count as two Knights, the Traitor counts as one Knight, and the Mercenary counts as half a Knight).
If the number of Knights is the same, then the Knights with the higher rank win the battle.
Castles (numbered cards) captured are placed face-down in front of you.
Nobles (face-cards) captured are placed face-up in front of you.
Each player takes back his/her Knights, Captain and Traitor dice.
Pass the Starting Player Token to the player on the left.

End of the Game:
After 5 rounds, the game ends (there will be 2 cards left over from the deck).
Each player adds the numbers on his/her Castles.
Player also receive bonuses for their Nobles:
If one card of a Noble type (J, Q or K) is collected, it is worth 2 points, 2 are worth 6 points total, 3 are worth 12 points, and all 4 are worth 20 points)
The player with the most points wins.
In case of a tie, the player with the most cards captured wins.

VARIANT SUGGESTIONS (not part of the original competition entry):
Less Cards Variant: For more competition (especially with less players), decrease the number of cards available per round and play more rounds (8 rounds with 4 cards each, for example).

Straights Variant: Instead of placing a group of dice of the same rank at a Battlefield, a player may place a “straight” of dice (or add to a straight already on a Battlefield) of different values (For example: 2-3-4-5). A Captain in a straight is still worth 2 Knights, a Mercenary is worth ½ a Knight, and a Traitor may only be placed at one end of the straight—not in the middle (in case it defects later in the round).
A straight of Knights are worth less, however, than a set of the same number of same-rank Knights. (For example: four 1’s are worth more than the straight 2-3-4-5).
A player may not place a straight on a Battlefield that is identical to another player’s straight. When there are two straights on a Battlefield, the straight made up of more dice wins. If the same number of dice, the straight with the highest die wins (For example: a player can beat another players 2-3-4-5 straight with 1-2-3-4-5 or with 3-4-5-6).
Posted by Jeffrey Allers 1 comment: