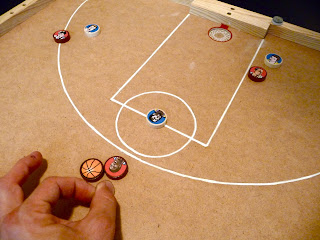 There are many different motivations for making games.  Of course, the goal is usually to make a game that appeals to as many people as possible and then get it published so that those people have the opportunity to play it.  For me, however, sometimes a game design's sole purpose is simply to be a unique and personal gift for a good friend.  And other times, I want to design a game that would be fun for my friends and family and I to play, no matter how unmarketable it may be. Street Basketball was one of those designs.

I was crossing a main boulevard in Berlin a few nights ago, in order to pick up a DVD for my wife and I to watch that evening.  It is a busy street, with a grassy island in the center and two sets of tracks for the streetcars that travel each way on that island.  At various intervals, there are paved pedestrian crossings across the tracks.

At a break in the traffic, I strolled to one of those crossings, lost in my thoughts as the city air turned cool in the early evening.  After making it across one track, however, I was jolted out of my daydream by the sight of a streetcar coming towards me from the opposite direction on the other track.  I saw it in plenty of time to stop and wait, however, because of the way the path across the island was designed:  the civil engineers did not simply pave a straight path across, but, instead, made it jog a few meters so that the pedestrian would be forced to turn in the direction of the oncoming street car, no matter which way he would cross.  There was no need for me to even turn my head to make sure the way was clear, and metal fences also prevented teenage cyclists from darting across carelessly while plugged into their iPods.

It may seem funny, but I was inspired by the thought that went into such a simple, utilitarian design.  And I was impressed that--although it was purely functional and not at all an aesthetic work--it's design was successful in actually reducing human error and accidents. I began to ponder other areas of design in which the functional aspect can be so well thought-out that it limits human error, and, naturally, I thought of boardgame design as well.

WHY Do I Design Games?

Why do I design games?  Just about everyone I know asks me this question eventually, and I probably respond with a different answer each time.  Oftentimes, it's even easier to explain which motivations I do not have, namely fame and fortune.

Recently, however, I took some time to reflect a bit more on this point.  So, for what it's worth in blogging currency (which, admittedly, is pretty cheap these days), following are the events and inspirations that led me to start designing boardgames, and reasons why I continue to do so...the "long answer" to the oft-asked question: