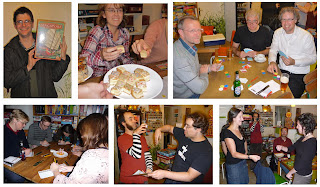 Six years ago, my friend Michael from the Spielwiese gaming cafe agreed to help me bring a little bit of SPIEL back from Essen and celebrate in his cafe with all the great new games released there--many of them from Berlin designers.

The photo galleries on my After Essen Party page show some of the fun from the past five years.  As you can see, it has been a great mix of games and guests from around the world, and we can even claim that Spiel des Jahres (German Game of the Year) award winner Qwirkle was discovered here!

As always, the 6th Annual After Essen Party is open to the public, athough space is limited and it is best to come early.  Visiting designers are welcome to show their newly released games as well (please, no prototypes, however).  Feel free to contact me or Michael at the Spielwiese in advance (especially if you are a game designer or publisher).  The party is on the Tuesday after SPIEL, beginning at 7 p.m.  Hope to see you at SPIEL and at the party in Berlin afterwards!
Posted by Jeffrey Allers No comments:

One of the big debates in the world of sport recently was on the fallibility of referees, especially in soccer. Missed calls, goals being allowed that were clearly not goals, and goals being disallowed that clearly should have counted are often game-changers in a sport with traditionally low scoring games.  But while many other sports have adopted high-tech solutions to supplement human referees, FIFA, the world governing body of soccer has stubbornly resisted.

But they are not alone. When reading an Op-Ed piece in the sports section of a local newspaper, I was surprised to read one writer's argument that it is actually the numerous referee mistakes that give soccer so much of its drama.  Furthermore, he reasoned that to reduce that human error would somehow be robbing the sport of one of its most popular aspects. 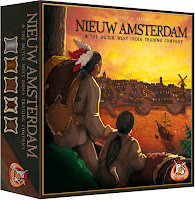 It's difficult to believe that a city as renowned throughout the modern world as New York City started out with a completely different name. All the changes that the original colony – New Amsterdam – went through to become the iconic American metropolis is actually an accurate metaphor for the evolution of a board game design that looks very different from the first prototype I pitched to publishers. Following is a logbook of my own voyage of discovery.

Inspiration in the Old World

It was 2007, and I finally had my foot in the door with several German publishers, anxiously awaiting my first game releases scheduled for the following year. I had a flood of other ideas I was working at developing, but I was distracted by the interesting new dice mechanisms appearing in European strategy games (and I was testing my own dice game, to be released later as Alea Iacta Est). Then I read about Andreas Seyfarth's new game Airships and was intrigued by yet another unconventional use of dice. It challenged me to think about other ways dice could be used in creative ways.