For anyone from the United States, the subject of child molestation and preventing sexual abuse has, again, come to the forefront.  It should not be surprising to anyone, as recent statistics have reported a staggering number of child victims (1 in 6 boys and 1 in 4 girls).
What is shocking to most people in this case, but unfortunately all too common, is the lack of action taken by authorities when abuse was initially reported.  Unfortunately that, too is all too common.  In the Penn State case, it appears that protecting the revered institutions of its university and its football program were more important than taking the claims of child victims seriously.
This happened in the world of high-stakes sports, but it can happen anywhere.
Yes, even in the game room. 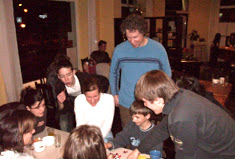 Protecting Your Children and Yourself

Things NOT to Say When Pitching to a Publisher

Your game idea has been lovingly and painstakingly transformed into a playable prototype, and you've received enough encouraging feedback from your playtesters that you are ready to present it to publishers.  There are quite a few blogs and books out there describing the way you should act and the things you should say.  Here are a few things you should avoid saying if you'd ever like to see your name on a cardboard box: 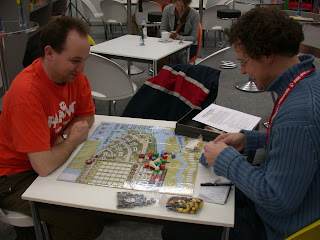 Pitching a game to Hanno Girke in Nuremberg.  How did it go?
Let me answer this way:  have you seen my name on a Lookout Games box yet? 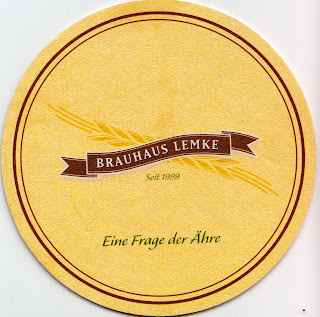 My sons were at their very first "sleep-over" at a friend's house last night, and my wife and I took advantage of a babysitter-free night to hit the town.  We headed over to the west side Charlottenburg Palace to take in a Baroque concert, but first we stopped by a popular brewery across from the palace for dinner.  The brewery had changed owners since I was last here, and I was surprised to see the same word game that was used for the title of one of my board games, Eine Frage der Ähre.  Normally, the saying is "Eine Frage der Ehre" which means "a question of honor," whereas Ähre is pronounced the same way but means "ears of wheat or corn."  It fit my farming game perfectly, and it seems to be a good marketing slogan for a brewery as well.  Perhaps I can re-theme the game and sell it through the brewery?