It can be heard in just about every gaming group, on just about every evening.  Someone excitedly reports, "I have an idea for a new game!"  In fact, there are quite a bit of blog posts that begin this way on the Boardgame Designers' Forum and on Boardgamegeek's designers' forums.  Sometimes, the would-be game designer actually has worked on the idea for awhile, constructing prototypes, playing solo games to get the kinks out, and writing a basic, flow-chart-like set of rules. 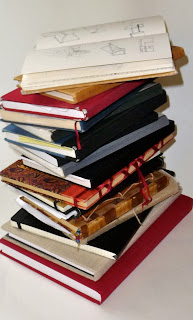 Some of my ideas.
More often then not, however, that person will admit that they have simply been "tossing the ideas around in my head for awhile."  Perhaps he or she has not had the time to try to flesh the idea out.  Or perhaps it is simply too much of a risk to see if the ideas actually hold up to a playtest. As long as it is an "idea" that exists only in the imagination, it works (idea = ideal).

Games are only as good as their playtesting sessions. Since a game is designed for interaction, there are elements of the design that can only be exposed and critiqued when the game is finally taken out for a “test drive.”

This is usually the most difficult part for any prospective game designer who has the discipline to get their ideas into a working prototype. Finding others who are willing to play an untested game—one that will undoubtedly have some rough edges and even, possibly, be “broken”—can be a real challenge. However, pitching the prototype to friends, acquaintances, and finally, “blind” playtesters (those who must learn the game from your written rules without you present), can also be good practice for eventually pitching to a publisher.

It is difficult enough for a wannabe designer to find those guinea pigs. After all, “beggers can’t be choosers”—they usually must accept whoever they can get. And it’s true that just about anyone can provide at least some helpful feedback, but some playtesters are truly better than others. A variety of playtesters and gaming groups is also important, as the game will play much differently each time. I always try to test my games, for example, with both my game designers’ group and at another gaming night, either at my home or the one I host at the community center where I work (and when I began, I had a weekly youth game night that enjoyed playing my prototypes).


Because playtesters are different, and each provides important feedback, I’ve compiled a list of the types of people I like to have at my gaming sessions to try out my new designs:

I grew up playing games.  These, however, were the typical mass-market offerings for children and families, such as Hi Ho the Cherry-O, Pay Day, Candy Land, Clue, Parcheesi, The Game of Life, Monopoly, and Risk.  After being exposed to the larger world of modern board games, even sentimentality cannot bring me to pull out those same classics with my own family.  There are too many games these days that are better designed and much more fun to play--for children and adults alike.

Sometimes, however, we visit friends who are not familiar with anything outside this limited group of mass-market evergreens.  Many of them are open to learn one of "my games"--not necessarily one I've designed, but something I've brought with me.  But they also usually want to play one of their games, and I don't want to be a snob, so I usually take that as a good compromise.

As a designer, however, I'm always looking at the games I play with a critical eye, wondering whether a few tweaks could bring an old game into the 21st Century, or whether a mechanic or two could be salvaged from a poorer design.
Read more »
Posted by Jeffrey Allers 1 comment: