The Game is Kaput 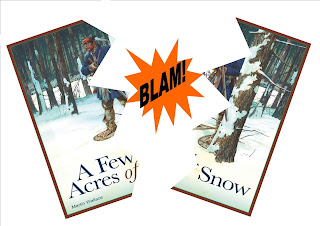 Kaput is one of those few German words that I did not need to learn after I arrived in Germany. Like Gesundheit, kaput has a firm place in the American vocabulary, although I remember it being used with children more than in serious, "adult" situations  ("Awe, your toy is kaput" rather than, "Yes, sir, I think that it's the alternator that is kaput").

In gaming groups and hobby forums, the word's English equivalent seems to be popular in describing many new games:  broken.  Apparently, if we are to believe public opinion, a good portion of new releases just do not work.

In Germany, we don't really ever use the word, kaput, to describe a game--even one that is only a prototype and still very much a work in progress.  Instead, one says simply, Es funktioniert nicht (It does not function).  And in my experience, that statement is usually only reserved for prototypes that still need some work.

Frankly, I think the word, broken, is overused in English gaming circles, because it is usually a rash judgement after a single play, rather than a true statement that the game doesn't work at all (which is the real meaning of the word: the game can break down due to an unforeseen action from one of the players). I've heard the term used so often to describe games (or elements within a game) that simply do not appeal to that particular player ("The bidding drags, and I don't like bidding games, therefore this game is broken").

Or it describes a game that is "solvable," or has a proven winning strategy that works every time.  Still, even the revelation of an unbeatable "Halifax Hammer" strategy has not kept Martin Wallace's A Few Acres of Snow from winning all kinds of awards. There are apparently enough gamers out there who are forgiving of brokenness in their games, if that's what it really is.  Or the people giving out the awards are more overwhelmed than ever by the avalanche of new releases, and do not have the time to explore the games enough to discover their faults. More common, however, are the reviewers who do not take the time to explore games enough to find that they are not, in fact, broken.


Recently, at one of my game nights, I was playing the game Mammut.  As I was breaking out for the first time and reading the rules, another player walked in, but when I asked whether he would like to join us, he refused, claiming the game was broken.  It's true that a player can stretch out the game by taking all the pieces at the beginning, and that did indeed happen in his first game, but it has absolutely no strategic merit.  Still, he was ready to pan the game in an online review after a single play. After our game was through, I felt it had a nice original distribution mechanism, surrounded by fairly standard Euro-type scoring, but it was hardly a broken game.

With a prototype, of course, it's quite common for a game to break down, especially in the early phases. It's even good to have playtesters that are good at trying to exploit weaknesses in the rules, to make sure they are sound. In those cases, though, I think I prefer the German, with one added word: "Es funktioniert NOCH nicht (it does not YET function)."  Once the game has been published, however, it's too late for that.
Posted by Jeffrey Allers