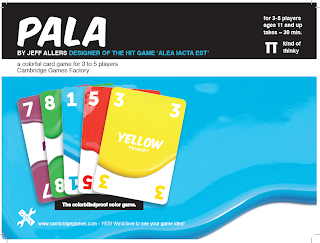 Back in 2005, I was still working my way through the vast archive of classic German boardgames. At the same time, I was refining my own ideas so that I would finally feel confident enough to bring them to my Monday night gaming group—one that included several established designers as well as others who soon would be.

I had learned German back in the mid 90's when I had first moved to Berlin, but entering into the world of game design felt like language learning all over again.  And although it was important for me to master the grammar of game mechanics, it was the theme of each game idea that inspired me the most, in the same way that the content of poetry moves me more than rhyme or meter.  Or the way that, as an architect, I was much more interested in the spaces and forms created and the concepts communicated than the structural calculations (that is why we have structural engineers, after all).

In any case, I was on the hunt for themes I had not yet seen, confident that new and interesting mechanics would automatically follow.  One of those early designs was about ticket scalping, and it turned into the published game, Circus Maximus, released in 2008.  Another dealt with one of my favorite pastimes of that period: painting.

The First Brush Strokes
One of the most interesting parts of painting, especially with oil or acrylic, is searching for the right colors, which usually involves mixing several preset colors on the painting palette. This actually feels very much like a game, and I thought to myself (in 2005, mind you), “THIS is an original theme!”

I jotted down ideas for games of different types and genres, but finally focused on a trick taking card game mechanic.  The first version included a real wooden palette as a small game board, and I painted spots of the three primary and three secondary colors onto it.  Each player received a hand of numbered cards in 6 suites (again, 3 primary, 3 secondary), and one colored 6-sided die.  The die was used to bid on a particular color, secretly and simultaneously.  For each secondary color that was bid, a trick was worth +1 point that round, while for each primary color bid, a trick was worth +2 points.  All primary colors not bid were, on the other hand, worth -1 point per trick, while the secondary colors not bid were worth -2 points per trick. 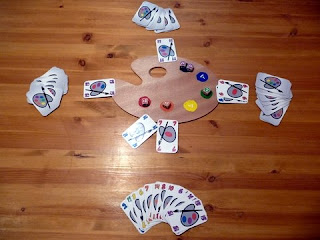 But it was the color mixing that made this different than any other trick taking game I had played, and this was the core idea of the game:  if a player led a trick in a primary color, another player could later change the color of the trick to a secondary color by mixing it with another primary.  Likewise, a player could follow suite on a secondary trick by playing the two corresponding primary cards.  The opportunity to play two cards instead of one at key moments led to some interesting hand management challenges.  Since the cards would be added together, I made the secondary cards have higher number values than the primaries.

And although I am, as mentioned, a “theme” and “concept” type of designer, once I got that part nailed down, I did not shy away from doing the math.  I soon had the numbers on the cards balanced enough to take the game to my group.

Exhibiting the Work
In the Spring of 2006, I tested the game with new friends Bernd Eisenstein and Peer Sylvester, and Peer liked the game so much, he later declared it his favorite prototype of the year on his blog, and was even partially inspired by it to create one of his own trick taking games, later published as Filipino Fruit Market. For his part, Bernd suggested the name, Pala, which has stuck ever since.

One idea that came after the initial playtesting was to discard the painting palette and dice in favor of using only cards.  Instead, I had a bidding card for each color with the corresponding negative value, and then added the positive values to one side of each of the other cards.  This required each player to sacrifice one card from her best color to bid, which formed a row of bid cards in the middle of the table showing both positive and negative points for that hand.  The mechanism worked beautifully, and I was anxious to present it to publishers. 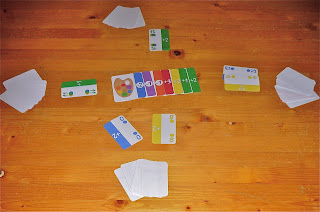 In June of that year, I took it to the Game Designer’s Convention in Göttingen.  While playing the game with several publishers, I probably made a first-timer’s mistake by trouncing them both.  They joked that I was supposed to let them win, and I confessed that I had skipped the workshop for "Pitching to Publishers" that day.  But they left the table without requesting a prototype, and I was left to wonder if they were only half-joking.

I later tried to send the game to a publisher who releases a number of mass-market card games every year, but they returned the game several months later, claiming that it was too heady for their test groups.

Soon after the prototype was returned to me, I saw a note from Ed Carter seeking games for his Cambridge Games Factory.  I thought it would be interesting to try to work with a smaller publisher—and one from the U.S. at that—and sent him the rules to Pala.  Ed wrote me back with a contract after testing the game with his MIT group, and was excited about publishing the game soon.

He turned over the development of the game to Rob Seater, who has given me some of the most thorough written feedback and analysis of any game developer I have worked with.  He soon became the “structural engineer” compliment to my artistic sensibilities, and I enjoyed working through his ideas with him.

As is often the case with publishers large and small, however, the project was delayed for some time, and I moved on to develop other game ideas.  I even toyed with using the idea of color mixing in a board game until the arrival of Fresco, soon followed by Pastiche.  It was still a pleasant surprise, however, to hear that CGF was shooting for an Essen 2011 release for the game, especially since I would finally be attending the fair myself.  Color mixing may not be a “new” idea for a game anymore, but at least this would still be its first implementation as a trick taking card game.

In the meantime, Rob had playtested the game extensively with fans of trick taking card games, and through further study of the genre, had come up with alternate ways of bidding that they preferred.  He cleverly named them after painting styles. In the Impressionism variant, which more closely resembles my bidding mechanism, players collectively determine the value of different colors (suits) by discarding cards from their hands before the round begins. Points are bad, analogous to Hearts. In the Pointillism variant, however, players bid with colored chips to indicate the colors they expect to win, but over-bidding risks losing all a player’s points for the round. Points are good, analogous to Spades. 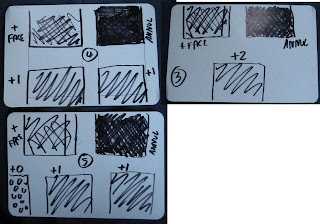 Once players learn the core mechanism of the game, the way colors are played and mixed to take tricks (or force others to take tricks), the two variations in bidding and scoring can be picked up easily and interchanged to offer variety to fans of trick taking games.

Although a painting may have a tendency to increase in value after its creators’ death, I hope—now that it’s finally being published—I’ll be able to see many people enjoying Pala a long time before I’m gone. 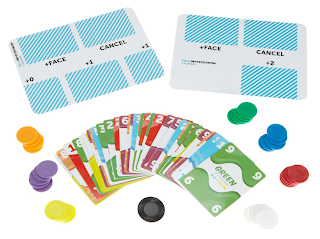