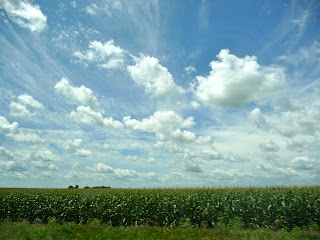 It is a stark contrast between the European metropolis and the Midwestern small town; between the urban life I now live and the rural roots I left behind, buried deep in the black Iowa soil. But I found myself returning home, flying alone, my seat locked in an upright position as I gazed out onto the square fields below, a view that could easily have been a game board.

I was on my way to the town where my father had grown up, a small town that once seemed so perfect it was proof that Andy Griffith’s Mayberry was not so mythic after all. Keystone sprang up along the railroad in the late 1800s, before the invention of the automobile. Like most small towns in the U.S., it thrived well into the second half of the 20th century, before the decline of the family farm and before the arrival of the interstate bypasses, strip malls and suburban shopping centers that effectively destroyed Main Streets across the country.

But the Keystone of my childhood still bustled with activity, even as the dwindling population aged and the need for farm subsidies increased. My family would go back often, and my sister and I spent a week of every summer vacation there. Each time our car rumbled across the railroad tracks at the entrance to town, our hearts would beat faster. Our necks would strain to look at the giant grain elevator, the tallest building in town, then at the wide Main Street, the bank and library, and the general store, Allers & Sons, where Grandpa and Grandma worked. A few blocks later, we would pull into the driveway of a tiny ranch-style house, and a gray-haired woman would be waiting and smiling.

It was obvious why my cousin called her “the laughing Grandma.” Her joy was palpable and she would giggle at any attempt at humor, which was always a boost for one’s self esteem.

I’ve discovered since then that spoiling the grandkids is common practice the world over, and my Grandma was no exception. In addition to taking my sister and me to the park on demand and feeding us chocolate donuts for breakfast, she gave us the freedom to explore, and the town was a perfect place to exercise prepubescent stabs at independence. Keystone wasn’t big enough to get lost in.  I could stand in the middle of town and see the farm fields on all sides, giving me the feeling that I was on an island, as waves of corn tassels blew in the breeze all around.

I spent many mornings exploring the “island,” ducking into the grocery store afterwards to help Grandpa stamp prices on cans and boxes, or to sit on the floor and read all of the comic books. Grandma was at the cash register, and I was allowed to pick out one of the little toys or games they had for sale. And if I didn’t find a game there, we would dig through the attic to rediscover the games of my father’s childhood.

Grandma was always willing to play anything I found, whether The Game of Life, Rack-O or one of the many spin-offs of the 50s and 60s television game shows that were so popular in their time. While I also dug out classic toys like my father’s Tinker Toys and an older type of plastic building block similar to Lego, the games were the most memorable because we played them together.

My grandmother enjoyed playing games – not so much for the competition but for the time spent with friends. In Keystone, the only gaming groups to speak of were senior citizen card clubs and Bingo at the care center. In fact, after my grandparents sold the store and entered retirement, Grandma volunteered at the care center across the street, often helping with Bingo night.

When Grandpa passed away suddenly ten years ago, though, things were never the same. She still laughed, but I could sense the loneliness underneath. She dealt with her loss by keeping busy with a variety of volunteer work at the care center, in her church and in the community. She even learned how to use a computer and email, and we corresponded regularly.

A little more than a year ago, we learned that she had liver cancer. It was not crushing news for her, as she told me that she felt she had lived a full life and was ready for the next one. It didn’t slow her down one bit, either, and she continued her busy schedule. In fact, she showed no symptoms of the aggressive disease and would often shrug off concerned friends and family members by telling them that she was cured. When her health finally did start to decline about a month ago and jaundice set in, she joked with everyone that she had been visiting a tanning bed.

I knew, however, that the end was coming, and I wanted to see her one more time. I needed to say goodbye.

And so I drove into town once more, over the smoothed blacktop that used to cross the railroad tracks, down a quiet main street and past the deserted grocery store, around the corner to the little ranch-style house, where the laughing Grandma was waiting.

We did laugh as we celebrated all the fond memories we had together. We played games, including one of her old favorites, Rummikub. And she was even courageous enough to learn a new game on our last evening together. In her first and only game of Ticket to Ride, she pulled off a surprise victory that sent the whole family into uproarious applause as she sat quietly with a smile on her face, blushing slightly.

She told me she was hoping to make it to her birthday. She died peacefully at eight o’clock in the morning last Thursday at the care center, surrounded by many of the people she herself had served a few weeks ago. Eight hours earlier, she had turned 87.