PELOPONNES & the beginning of IronGames 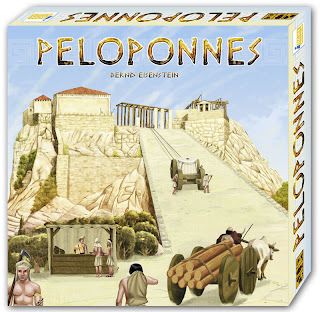 In the film industry, they are the writer/directors; in music, the singer/songwriters. They are like architect Frank Lloyd Wright, who always maintained artistic control over his entire work. In the board game industry, we call them self-publishers. And every October in Essen, more of them gather together in one place than anywhere else in the world at any time of year. In spite of the large number of established game publishers in Germany, many designers here still choose to publish their own creations. In fact, half of all the Berlin designers I’ve met have tried self-publishing at least once. Andrea Meyer, Günter Cornett, and Richard Stubenvoll have all experienced enough success through their first efforts to produce follow-up games. Now, “Irongames” has been added to the list, a formidable brand name and a clever play on designer Bernd Eisenstein’s name.
Bernd and I have been friends ever since he moved to Berlin and joined our game group, and I’ve enjoyed testing many of his prototypes, as well as working on a few projects together. At the time we met, he had already won the Hippodice game design competition with one of his first designs ever, Herrscher der Anden, and the game had been published by Abacus under the name Maya. Most of the prototypes Bernd brought to the group were deeper and more complex, however, as those were the types of games he enjoyed playing. Bernd said that he never considered self-publishing at that time, though, and his prototypes were sent in a steady flow out to the established German companies. None of them were picked up, but a simpler, more family-oriented game finally was, and Zack und Pack put Bernd’s name back on a board game box for the first time in five years. Shortly thereafter came our first published game together, Alea Iacta Est.

“After that, I wanted more,” Bernd said to me recently. “My more complex ideas were rejected by publishers, and those were the games that I loved the most. So in 2008, when Peloponnes was rejected the second time, I made the decision to self-publish because I was especially excited about this game and feel that it is my best to date.”
Bernd had the first ideas for Peloponnes over three years ago. “I wanted to make a multi-player game with asymmetrical starting positions, and I wanted to make a civilization-building game that played in a shorter time span,” he said. The first ideas came quickly, he added, but the process of maturing the design took years. “In the beginning, there were far too many complicated rules,” Bernd said. “Also, for a long time, the tiles from all players were placed together in the middle – like a typical tile-laying game – but that made the overview more difficult for the players, keeping track of income was too much work, and the last player had too much of a disadvantage.” Other than that, however, the game has remained consistent with Bernd’s original vision, he added. 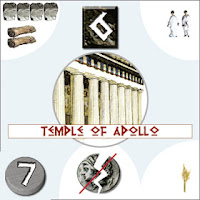 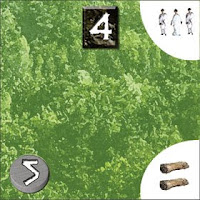 Above: tiles from the prototype
When he felt it was ready, Bernd began offering it to publishers – one of whom held onto it for almost two years. Unfortunately, however, the patience did not pay off, as it was rejected twice with no helpful feedback provided from the publishers. “Fortunately, I made a second prototype during that time and continued to test it and tinker with the rules,” he said. By the time he received his prototype back from the second publisher, he had made up his mind to go ahead with self-publishing.
Though Bernd was a newcomer, he had the benefit of being in a community of game designers with self-publishing experience, as mentioned earlier. Stubenvoll of Histogame and Cornett of Bambus helped with tips on production, Essen booths and sales. And it didn’t hurt that his fiancé is a graphic designer who was happy to work on the layout for the rules booklet, the company logo, and, as a gamer herself, “offer objective criticism,” Bernd said with a smile.

Even with the financial costs required, Bernd was careful not to risk more than he could stand to lose, he said, and he hasn’t given up his day job either. There were other things to worry about, however, such as the possibility of negative reviews, being overlooked in Essen, printing errors or delays, and unforeseen mistakes surfacing in the game’s balance, he said. “And I would need to find more storage space if not enough are sold at the fair,” he added.
Many self-publishers try to cut costs with their graphics and production quality, hoping the mechanics and novelty will sell their games. Bernd opted instead to go with a known illustrator and professional quality components. “These days most games are made from quality components and are very optically impressive, and one cannot hope to compete by offering second-rate graphics,” he said. And because Bernd is not dependent on the game’s sales for his income, he could still offer it at a competitive price, he added.
Matthias Catrein, now well-known for his work with Phoenicia and multiple-award-winner Dominion, was the first to show interest in Peloponnes. Bernd explained, “I contacted several illustrators whose work I admired, and Matthias gave me a good offer and said that he wanted to support the project because he liked it.” They met in Essen in 2008, where Bernd showed him the prototype. “I am so happy to have found a good illustrator,” Bernd said. “Working together was very uncomplicated, and it was a learning experience for me as well.” 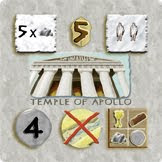 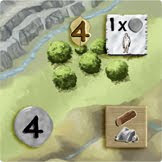 Above: the finished tiles from Catrein
Still, there were plenty of other complications. As Catrein started work on the graphic design, further playtesting revealed the need for more minor tweaks in the rules. In addition, Bernd shared that “there are many hidden costs that are easy to overlook, including the rental truck to Essen, storage costs, advertising such as posters, T-shirts and bags – and Internet ads cost more than you would expect.”
Bernd was eager to present his game at his own booth for the SPIEL convention in Essen.

“The atmosphere in Essen is unbelievably good,” he said. “The competition is enormous, since so many ‘gamers’ games’ are released there, but all the Spielfrieks who like those types of games are also there.”
He shared a booth there with Schäfchenverlag and also offer an expansion to Peloponnes that included material for a sixth player and extra tiles and rules for a “Sea Variant.” Fortunately, the game was well-received and has since sold-out, and Bernd has sold additional expansions to the game.
Will there continue to be future releases from Irongames? “Yes!” said Bernd, without hesitation.

“There are enough game ideas there for years to come.”