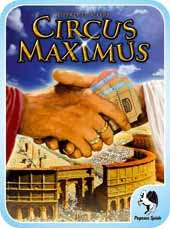 About 6 years ago, shortly after I first discovered the wonderful variety of German games, I was living briefly in Fresno, California and started to take notes on my own game ideas. I had not yet played many of the “new classics” of German boardgaming, but I was slowly discovering them through reviews on the internet: first, the Counter articles posted on Funagain.com, which then linked me to Boardgamegeek.com.

One of my first thematic ideas involved a game in which players tried to make money scalping tickets. There were a lot of big-name concerts happening that summer and I had heard that some people were actually paid to camp out all night at the box office line to get tickets for scalpers who would then sell them for a profit. I had originally envisioned a modern city like Los Angeles as the setting, but then I thought ancient Rome might be more whimsical. And it provided a great name that, unfortunately, does not translate well into German: Scalpus Maximus.

The main idea of the game even then was that players needed to get their hired scalpers in the front of the line at the box office to buy the best tickets, then send other scalpers to the different venues as early as possible to find the highest-paying patrons. It was clear that “scalper-management” was the key to a successful strategy in the game, but I was too inexperienced in game design to come up with an original treatment of this theme.

When I was back in Berlin, I started making prototypes of the game to try out, but the first ones were much too complicated with far too many bits for what the game was supposed to be. The idea then was that the scalpers would line up at each venue twice during the game: once to buy tickets at each venue’s box office, then to sell tickets to the people coming to the show who were looking for last-minute seats.

Several of the first prototypes were actually never playtested, because I realized during the process of making them that they were not what I wanted. The venues in the first prototypes were stacks of mixed tiles that would randomly determine the number of tickets and patrons available each round. There were piles of ticket counters and each player would have a mat and scalper cards of different values and costs to place. There were also money chips in the game to pay each scalper used, and to buy the tickets, and I had elaborate charts determining the amount each patron would pay for each kind of seat. There was also a second currency in the game, VIP Passes or Favors, that were used at Caesar’s Villa to sell more tickets to the patrons who attended his parties. But the parties did not take place every round—something also triggered randomly by the venue tiles. 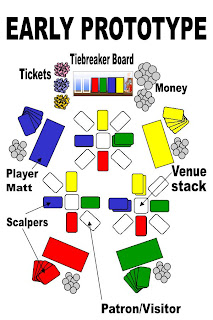 Some might say it was a waste of time and materials to make prototypes that were never played, but it helped me see problems in the design that I would not have seen, had it stayed on my computer. Changes I made included using a single box office, for instance, and the venues were then only visited to sell the tickets. I was also often tempted during the process with using blind-bidding in placing the scalpers at the box office and venues, as I had been enjoying classics of that genre like For Sale, Adel Verpflichtet, and Die Mauer at the time. I even borrowed a tie-breaking mechanism from Zoo Sim, but in the end, I concluded that I was just being lazy and needed something different, so I put the idea on ice again.

During that time, I had joined a regular gaming group and was finally playing all the games I had read about, as well as just about every new release. We rarely played anything twice. And, although I soon realized that many of my initial ideas for original game themes had already been published, there was, to my knowledge, not yet a game about ticket scalping. My gaming group also happened to include several published Berlin designers, most notably Thorsten Gimmler, Andrea Meyer, and Hartmut Kommerell, and I learned much from them about the design process. Their critiques on other prototypes I brought to the group helped me land my first contract with a German publisher for a different game.

As my confidence in designing grew, I decided to tackle Scalpus Maximus one more time. I like challenges, and I like closure, so it is not surprising that I just couldn’t let this theme go. I was also motivated by an advertisement from an American game publisher looking for new submissions, and I thought that this theme fit well with their other games.

The design finally came together—mostly due to a little trick I’ve discovered that often works for me when I get stuck: if it’s a board game idea, I try to design the “card game version,” even though the board game hasn’t been completed. This helps simplify things and also provides a new perspective by imposing new limits. Once the idea starts to function as a game, those ideas can then be brought back into the board game design. As it turned out, Circus Maximus stayed a card game--with a board game feel, of course. 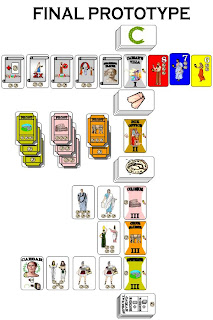 The main innovation from previous prototypes was completely ridding the game of money chips. To do this, I had to focus on the profit margin rather than an elaborate system of selling/buying prices and labor costs. Instead of paying for scalpers, for instance, a player received a number of coins/points for NOT using a scalper. Tickets only showed how many coins would be gained as profit, and patrons did the same. This cut down much of the calculating that players would have had to do in the early prototypes. It also made the game feel more positive, as you were only gaining coins/points instead of battling to gain more money than you were losing.

Caesar’s Villa also became a permanent location, and, in good “Eurogame” fashion, the Favors one could obtain there became special actions that allowed a player to break the rules (or receive bonus coins at the end of the game).

And, of course, I found a more strategic way of placing the ranked scalpers that eliminated the guesswork and “Princess Bride” quandaries of blind bidding and also made the Starting Player Favor Card valuable, especially in the 5-player game.

I finally felt ready to playtest this version of the game, and it was received well by my new group, made up of published designers Bernd Eisenstein, Peer Sylvester and Günter Cornett. Their comments during playtesting did contribute to a few significant changes, however. One was moving Caesar’s Villa from the second phase to the first phase of the game, and the other was to add the Special Events so that the 3 rounds of the game were not identical. The extra tickets and patrons available in the later rounds also made it easier for players to catch up if they did poorly in the first round.

After a few playtesting sessions more, I sent the game to the American publisher, but they turned it down without really telling me why. I then took the game to the Game Designers Meeting in Goettingen to show prospective German publishers. Two different publishers took copies of the game with them, and Pegasus Spiele, who had given me my first contract with another game, emailed me a short time later with an offer to license this one.

Development by the Publisher

It was incredibly fun to see the clip art of my prototype finally transformed by a professional illustrator. I was happy to see that much of the humor was retained in the cards: the artist kept my idea for a Tourist Card, for example, that depicted an Egyptian, complete with Pharaoh-style headdress.

André Bronswijk from Pegasus also worked with me on more fine-tuning of the mechanics. Some Favor Cards were revalued or eliminated, and his suggestion of having one less ticket at each venue increases the tension of the game. He also convinced me to have the Caesar Card taken out of the basic rules and added instead as a “variant for experienced players.”

It was inevitable, however, that the name would be changed, as “scalping” is strictly an American expression. In fact, I even brought two versions of the prototype with me to Goettingen: the original Roman theme and a tournament of knights in the Middle Ages called “Ritter Markt” (to make a play on words with “Knight” and “Schwarzmarkt” which means “black market”).

It’s been a long road, but as a friend and fellow game inventor pointed out recently to me, the process is much more fun than the finished product. That’s certainly been true on this one, although I am eagerly awaiting the arrival of my first published copy nevertheless. And I think it’s appropriate that, even though I had signed several other game contracts earlier for more recent designs, this game will be the first to hit the market. After all, it was one of my first ideas, one that I’ve been working on for the longest period of time. During the past 6 years, I’ve had the opportunity to work with many talented people, each of whom has contributed to Circus Maximus in a significant way, and I hope our collaborative effort is appreciated by everyone who plays the game.