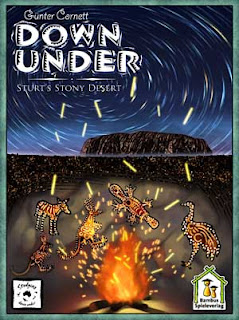 You could say that Günter Cornett is the veteran of our group, having twenty published games to his credit over the last 13 years. Many of these have been through his own publishing company, Bambus Spieleverlag. The history of his new title, Down Under, goes hand in hand with the history of Bambus. I will allow him to tell the story. - Jeff

Catalyst for a New Publishing House

The original game, Schlangennest (Snake Pit), started out as a pure abstract idea. The theme of tangled snakes was the obvious choice at the time. This game was the reason Bambus Spieleverlag was founded. The publishing house was created together with Gerhard Schech in 1995, and he gave the thumbs up to the project. Gerhard belonged to our game desigers’ playtesting group and also had two prototypes. Like me, however, he did not yet have a published game to his credit, so we decided to bite the bullet and publish it ourselves. 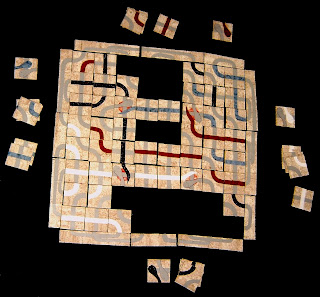 We were both convinced that Schlangennest was a good game and were willing to risk a few 1000 Deutsch Marks for its production. We were 100% game designers, which meant that we did not pay much attention to the graphics, but rather focused solely on the game’s rules. For this reason we selected the name “Bambus” for our publishing company: the appearance of bamboo is rather simple, but the material is actually very versatile. That was 13 years ago, and we have learned a lot since then.

Back then the printer, Hans Demand, received only a few sketches from us, but he was kind enough to make a simple graphic out of it for us. The black game box was received well, the game was satisfying from a rules standpoint, but it still took many years before the first 500 copies were sold.

From the rules standpoint, Schlangennest is a more simplistic Down Under. There were no special points and no "billabong" in the original. The absence of the billabong meant that there were rare cases when a player was not allowed to play a tile. Although this did not occur very often, it was still unpleasant.

Bambus would probably not have survived, had we not released Flaschenteufel (The Bottle Imp) at the same time. The first printing of that game also had very basic graphics, but the combination of theme and game mechanics were impressive enough that Bambus could continue. After the 500 copies of Schlangennest were sold within ten years, I considered developing a new edition, this time with better graphics. I was still pleased with the game and thought it deserved a better fate. However there was feedback from test rounds that something was missing. 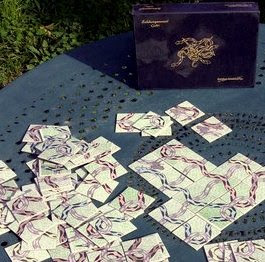 New Edition with a New Theme

As I was searching for a new theme for the new edition, I was working a lot with labyrinths, then tried using paths in a park. On the neutral paths were icons that rewarded players with bonus points. For example, a combination of the visitor icon with the bench and tree icons on the same path awarded 5 bonus points, while garbage on the path was -2 points (unless, of course, the path had at least one garbage can). A fountain provided the special rules (which later became the billibong). 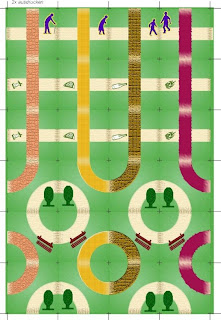 Then Elke Meinert asked me if I could make a game that would advertise Australia. Elke advises and cares for students from and in Australia (see: http://www.studying-down-under.de/ for information from Elke about attending school, language courses, other study, practical courses or to arrange a working-holiday visa in Australia and New Zealand). We considered making a big game, but then opted to re-theme the redeveloped Schlangennest. The trees, visitors and benches became the emu, kangeroo and platypus. The garbage transformed into rabbits and the garbage cans into a dingo. I read a lot about Australia—more than really necessarily, but I enjoyed it very much. During the development of another game, Nanuuk!, I read many books about the arctic, and for the game Kanaloa I studied the world of Hawaiian gods.

The Japanese graphic artist Ro Sato, who had already produced the graphics for my last game, Greentown, did a beautiful job with the new Down Under design. The wonderful graphics are a real plus and have received much praise. As a designer, it makes me happy, although I must admit to being a little jealous that this part of the work sometimes receives more attention than my own part of the game design. But with good games nowadays, everything must be correct, and for that matter, I am just as proud of Ro Sato’s graphics as I am of the rules. 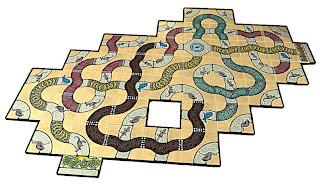 Different Production Versions
Unfortunately there were delays with production, so that Down Under could not be released until one month after the Essen game fair. For the fair, I made an emergency edition of 100 copies in ziploc bags, which Jan Frank of the Thüringer Spielwerk produced within a short time but with good quality. By Friday of the fair, they were already sold out. Since I did not know whether or not they would be ready by the next fair in November (Expolingua in Berlin), I had Jan do another print run, this time in DVD-boxes. This allowed me to produce Down Under in a numbered special edition, with the possibility for customers to request the type of cover they wanted for the game.
-Günter Cornett

Hi!
This is David, from Spain! I'm writing just to say that I find your blog very interesting. I'm a graphic designer and have just finish the design of a game near to be released (hopefully tomorrow!) and i found your blgo inspiring both for game designers and graphic designers as well. You now have an inconditional!

Thanks, David. I hope this blog inspires all those gamers who are talented but up until now only closet game designers.

Stories I read about the design process of other designers was always an inspiration to me.

What is the name of your game?

Actually I'm onlye the graphic designer behind the game. FOr now I can't say the name of the designer. It's supposed to be a secret until tomorrow! The blog is such an inspiration for me, go on that way!