It was a bit embarrassing to admit to one of my guests Tuesday night at the 4th Annual After Essen Party in Berlin.  He had come from half a world away just like many of the other 150,000 SPIEL convention attendees, and wondered if I’d made the relatively short train ride to the fair.  I could only sigh and steal a famous line from a certain former vice presidential candidate: “I’ve never been there, but I can practically see it from my house.” 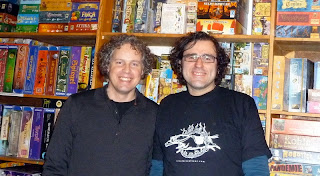 Michael and I hosting our fourth party.

Frowns soon turned to laughter, however, as the annual party in Berlin at the Spielwiese gaming café with proprietor and friend Michael Schmitt got underway.  The room soon filled with game designers and guests from around the world, most of whom had just returned from SPIEL. They came from Germany, Canada, Austria, South Korea, Singapore, and the USA.

Bernd Eisenstein brought his newest game Porto Carthago (he had also released two expansion to last year’s Peloponnes, the base game having sold out before this year’s convention).

Günter Cornett and Peer Sylvester had their new release from Queen Games, called Discover India, and Peer also had an abstract from small publisher Haiku called Bamogo.
Veteran designer Hartmut Kommerell brought wife Wiebke and three young children from their family for the first hour of the party.  He also had a new Haiku abstract called Orado with him. Although he did not have any other Essen releases, he had just visited Graz a month earlier to accept first prize in Austria’s Internationale Landespreis für Spielkultur game design contest. I played and enjoyed the prototype to Sonnenseite (Sunny Side) years ago and hope that this will finally be the boost it needs to find a publisher. 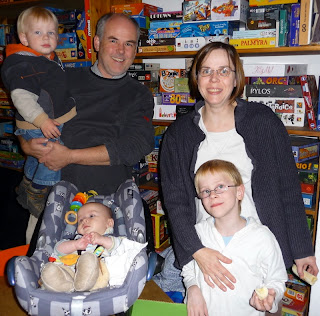 Hartmut and Wiebke with "gamer kids" in tow. 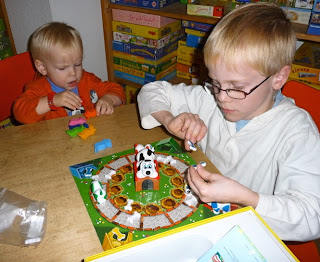 Andrea Meyer, co-designer of Freeze, also missed the party due to illness, another casualty of the unusually cold weather at Essen this year.

Two publishers attended the party for the first time, however.  The first was the Berlin company GameHeads, who brought with them their newest self-published game, Deringer, from design team Michael Nietzer, Oliver Wolf, and Hans-Jörg Brehm.  The poker variant looked great, especially the “Maverick Edition” they brought, which came in a large leathery-looking trunk.  The quality of their small company’s games is not surprising, as both Michael and Jörg are illustrators. 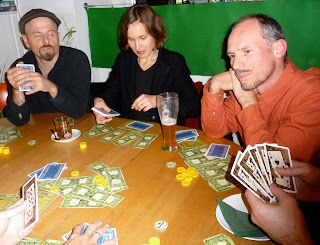 The other new publisher was Black Dove Games, a company “birthed by passion for boardgames,” according to their web page.  Designers Ng Edwin, Terence Lei, Mark Tham and artist Shawn Yap made the long journey from Singapore to demo their first release at SPIEL, Dive! Diver! Die!

Speaking of being “birthed,” the Spielwiese café celebrated it’s fourth birthday.  It’s been a great place for people of all ages from Berlin and beyond to come together around the gaming table for four years running.  Thank-you, Michael!

As with last year, I ran a few different competitions to decide who would receive the prize table games: Discover India, Porto Carthago, Hey Waiter, Freeze, and my Spring 2010 release, Wampum.  Back by popular demand, we awarded two of the games to the top two players in an Indonesian Finger Game tournament.   My friend, a juggler originally from California and “Mr. Abstract” gamer Daniel Schulz, who now works at the Spielwiese part time, has since created a multiplayer variant for the game.  In addition, he brought a bottle of spicy Irish chili mead to share with everyone.  I really enjoy foods with a kick, but this was quite different.  The tournament was just as fun as last year, and one of the Black Dove guys calmly marched through the competition undefeated to claim first prize.  Perhaps we’ll have to name it the Singapore Finger Game. 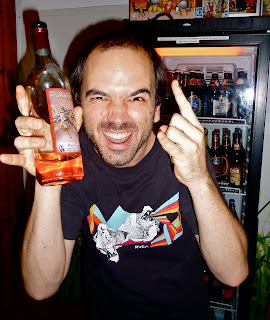 
In addition, we interrupted the boardgame action later in the evening with a simple “best of 3” Rock-Paper-Scissors tournament, which can be quite amusing to watch in the semifinal and final stages.  This time, the South Korean gamer-girl won a gripping match against the woman from Singapore that went down to the wire.  I’m sure after that kind of suspense, returning to a game of Luna was relatively relaxing.

This year, I made an effort to actually play more games during the evening, and my first was the long-awaited 7 Wonders, the one game I had Bernd bring back from the fair for me.  We crammed a 6-player game onto a tiny table, but had a lot of fun with it, as it provides that civilization-building thematic in a shorter playing time, much like Bernd’s Peloponnes from last year.  Of course, 7 Wonders cleverly uses cards instead of player mats and tracks (like Peloponnes and Endeavor) and the cards are distributed through card drafting (as in Fairy Tale and Notre Dame) without the need for auctions.  The military and trade mechanics provide some nice player interaction.  Of course, most of this is old news, as the game has been getting good buzz all year.  I doubt I’ll become a “groupie,” but I’m happy to have acquired it, and am looking forward to playing it again soon. 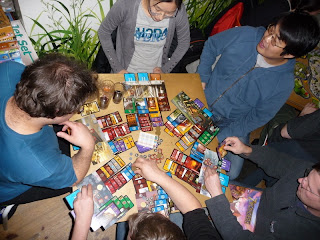 A 6-player game of 7 Wonders on a very small table.

Next, several of us joined the Black Dove group for The Resistance, a game I pre-ordered last-minute after reading about it from Boardgamenews.com columnist Kris Hall.  I’ve always thought that there could be a game with all the laughs and intrigue of Mafia/Werewolf, but with a bit more strategy and deduction instead of descending unavoidably into the mob mentality, led by the most dominant players.  This one was as good as I had hoped, and the Black Dove gang and two Germans with whom I played were most definitely the “right group.”  It was a hilarious—and intense—game right down to the end, and it just happened to hinge on my decision as the leader of the final mission (and I was part of the resistance).  Our previous mission had succeeded with unanimous ease to even the score with the spies, and I could have easily picked the same team for the final mission, but...doubts began to creep in.  One of my “allies” from the last mission, Ng Edwin, had also been one of the most outspoken players in the game.  Had he been manipulating me this whole time, knowing that he could easily sabotage the final mission and win with the spies?  I finally asked the other two players from the last mission for their council, and we agreed to trust him.  Thankfully, it succeeded, but we were all quite impressed with the angst and tension this little game was capable of.  I can highly recommend it. 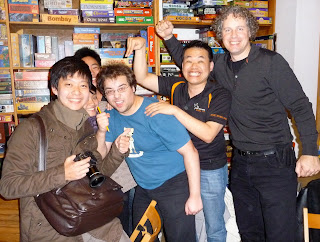 The international intrigue continues after a game of The Resistance.

And, of course, we learned something about Ng Edwin.  It turns out that he was very gifted at hooking SPIEL passersby into a short demo of Dive Diver Die during the fair.  The others joked that his famous line was, “Two minutes!  Just give me two minutes to show you this game, and you won’t be sorry!”  Thanks to The Resistance, we now know that behind that sales pitch is a deep sincerity.

Meanwhile Peer was trying out a game of i9n, and reported that it had two very original mechanisms.  But, he said, his group really had no idea how to play it in the beginning.  “I honestly don’t know what to think yet and will have to try it again.” 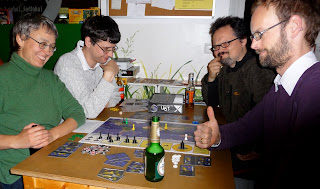 Peer tries to figure out i9n at his table.

Afterwards, he and Günter Cornett played the abstract Japan Brand game Hau La with two others at their table.  I teased Peer that I thought it was his game, as it uses a type of foam that he often employs in his prototypes.  His verdict was that it was “much to simple” for his tastes, and that four players were too many, making the game too chaotic. 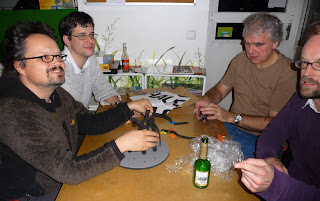 Some friends of mine were trying to learn Glen More from the rules, but the tiny Alea typeface and smallish game components were frustrating them a bit.  Afterwards, they asked me for something a little simpler, and I introduced them to Günter, who was able to teach them Discover India, which they told me they enjoyed.  I played an earlier prototype of that game and am looking forward to trying out the finished version soon myself. 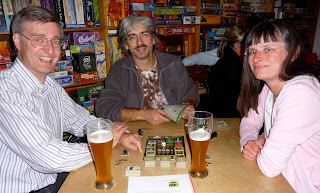 Bernd and Rolf from our prototype-testing group were able to play Derringer with the Gameheads, and with all the paper money included in the game, it was probably good they were at the largest table in the room.

Meanwhile, Michael joined Mario and a couple others to play the new Junta spin-off, entitled Junta: Vive el Presidente! I had read the rules in preparation for the evening, and was looking forward to trying it out, as it looked like it kept all the interesting parts of the original game, solved most of its flaws, and cut out the parts that tend to drag a bit. 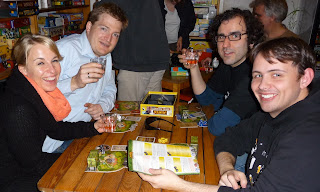 I also noticed games of Furstenfeld (another game for which I read the rules but did not get a chance to play) and Luna being played during the evening, but did not receive any feedback from those who played them.

Finally, as some of the gamers began leaving for home, we managed enough space to play the new improv game Freeze.  Michael joined me, a couple of other Germans and the Singapore group for a hilarious closer to the evening.  My deepest apologies go out to the poor guy from Austria who was unwittingly dragged into my “beauty salon” as I played the part of his clumsy, incompetent hair stylist. 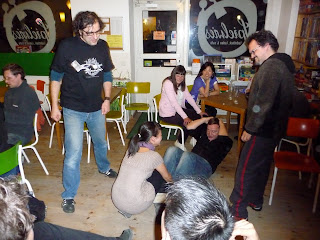 A late-night game of Freeze after the crowd thinned.

Then, after awarding a copy of the game to the winner, it was time to close up shop and return home, taking with us an evening of fun memories spent with new friends from around the world…

…and a lingering burning sensation in our throats from the chili mead.