“If you can’t make it to Essen, then make Essen come to you.” That has been my motto and motivation the past three years for the After-Essen Party in Berlin, and Michael of the Spielwiese has gladly hosted the event, as it always falls on the “birthday” of his café, which he opened the Tuesday after Essen four years ago. I also use the opportunity to invite international gaming guests who want to stick around in Germany after the event, and this year we were treated to Boardgamenews.com writers Brad Keen from the U.S., and Fraser McHarg and Melissa Rogerson from Australia. Fraser and Melissa even brought along their “gamer” daughters. 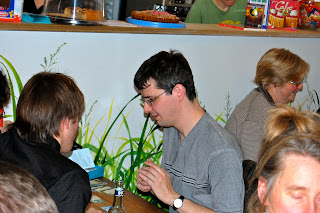 Peer Sylvester (right) teaches Fzzzt!
Before everyone had arrived, Peer taught several of us a nice card game of a size and quality matching many Adlung games. In addition to the gameplay, we had fun simply saying the name – Fzzzt!


By the time the short filler was finished, the tables were full, drinks were being served, and games were being pulled off of the impressive pile of new releases Michael had brought back from Essen. 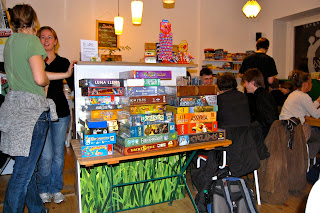 Part of the Spielwiese's haul from Spiel 09
This year, however, we had decided that we would program the evening a little more than in previous years. As the master of ceremonies, I gave a brief welcome, then presented the prize table filled with games by Berlin designers. Along with the new games everyone was itching to play, we had a few other games that the entire group would be playing simultaneously, with the winners earning a pick from the prize table. Rather than holding a simple lottery, Michael and I wanted people to earn their prizes.


The first of these was also a new Essen party game from Heidelberger called Erwischt! (published as I Betcha! in English from Le Scorpion Masqué). The game is actually meant to be played during other activities and includes a large deck of cards. Each card has three goals on it in increasing difficulty worth 1, 2, or 3 points respectively. The cards include goals such as “Don’t speak for 5 minutes” or “Ask someone to explain quantum physics.” After you attempt one of the goals, you must wait 30 seconds. If someone else suspects you are trying to fulfill a goal during this time, they shout, “Erwischt!” If no one catches you before the 30 seconds are up, you reveal that you just finished a goal and show the card to the others at your table. You record the number of points you receive for that particular goal, discard the card, and draw a new one. 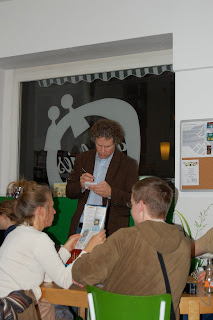 Keeping score for Erwischt
I quickly realized that playing this game over several tables was a bit more work for the M.C. than I had imagined, as I was very busy writing down scores and handing out new cards for the first hour of the evening. And it became clear that two of the tables in particular were playing very competitively, while the other tables had begun focusing on playing the board games in front of them. After several prizes were awarded, I wiped the sweat from my brow and took a break to relax with Andrea and Melissa.

Andrea Meyer, Melissa Rogerson, and a Berlin gamer playing Fabrikmanager
And what better way to relax than to play the new optimization game by Friedemann Friese, Funkenschlag: Fabrikmanager. The rules explanation was a bit much after running the show for a while, but the game started to become more intuitive by the second or third round. It is definitely a wonderfully intricate piece of game design, with some original mechanics that fit nicely with the theme.
We also had a few minutes to chat, and Andrea even taught us how to play Quartets with our fingers instead of using cards, which was an interesting logic exercise with a memory element. More importantly, however, it served as a perfect segue to my next prize-table contest: an Indonesian Finger Game tournament.
Valerie Putman had described this component-less, two-player abstract in a Boardgame News column several years ago, and it became one of my favorites to teach people when standing in line or killing time on a train. 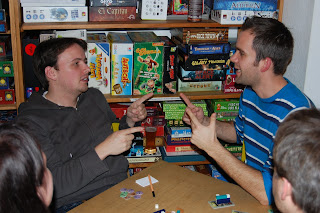 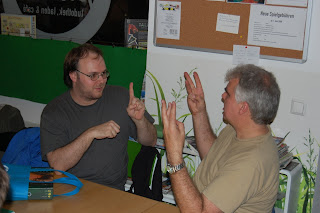 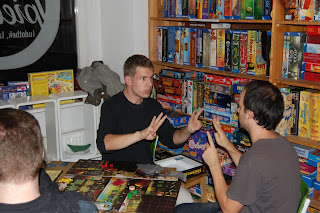 The rules to the tournament were simple: keep playing until you lose. When you win, play against someone else who has not yet lost. In the end, Bernd went undefeated and was
crowned “Indonesian Finger Game Champ of the Evening,” snagging one of the remaining prize table games that did not have his name on it. 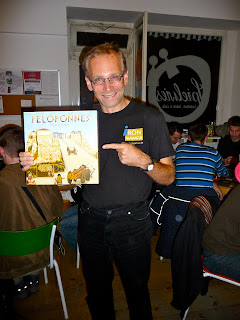 Designer Bernd Eisenstein and one of his mighty fingers
For the remainder of the evening, I was content to table-hop and watch others try to wrap their heads around all the new game rules. A few older games also made an appearance, most notably Qwirkle, the one Eric and Linda first introduced here three years ago. It is still not available in Germany. 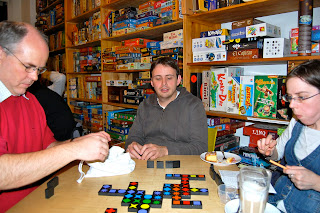 As the crowd dwindled, we sat back and enjoyed the last pieces of the “birthday” cake Hartmut and Wiebke Mast brought in for Michael and the Spielwiese – shaped like a giant red pawn, of course. Yes, it would have been nice to be in Essen this year, but sometimes it’s as much fun to skip dinner and just eat dessert.