It was an exciting evening, as Michael Schmitt celebrated the second birthday of his gaming café, the Spielwiese, and we held our second annual, open-to-the-public After Essen Party.  It was a great year for Berlin designers, and several of us exchanged copies of our new Essen releases, hot off the presses: Peer Sylvester’s new Bambus Spieleverlag book on card games from David Partlett called Entensuppe, Günter’s new Bambus game Tokugawa, designed by then-junior-high-age students Tizian Blumenthal and Victor Gilhaus, Bernd Eisenstein’s Zack und Pack – beautifully produced in that big Kosmos box – and my Circus Maximus and Aber bitte mit Sahne.

Michael has done a great job of serving the community and promoting Berlin’s game designers, and the Spielwiese was a great place to celebrate the publishing of the game ideas that had been playtested there week after week. It’s also become an excellent opportunity to actually play the new Essen releases, as the sheer number of titles and huge crowds at the convention usually prevent many from playing more than a round or two before making a quick decision to pass on the game or purchase it. 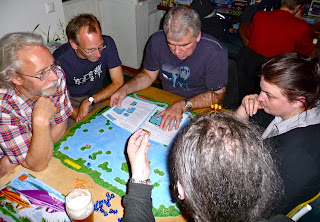 Prized play-testers Reinhold Müller and Carsten Schürnemann play my copy of Powerboats with Bernd, Günter, and Bernd's wife, Michaela
I arrived that evening to a packed house as every one of the five tables was full and many visitors were standing. Designer/publisher Andrea Meyer had a big group at her table to learn her new and very unique BeWitched Spiele game, Die 3 Gebote, which was designed by Friedemann Friese and Gordon and Fraser Lamont. 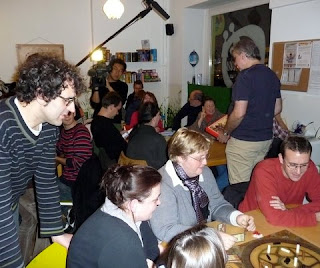 
Veteran game designer Hartmut Kommerrell (Finito!) and his partner Wiebke Mast were also there, and Wiebke was very pregnant. I recalled last year when she told me that she had some exciting news, and I wrongly guessed “You’re pregnant?” Back then, her excitement was due to some positive news from a potential publisher. Now, though, she really was expecting a baby, and so I congratulated her, um, again.


Designer and friend Bernd Eisenstein was also there with his wife Michaela to celebrate his first published game since his Hippodice Competition winner Maya was produced by Abacus in 2002. Zack und Pack is much lighter than most of his prototypes that we have had the pleasure of playing, but it’s great fast-paced family fun, the kind of game that instigates alternating groans and cheers from around the table.

I was thrilled, of course, after two years of signing contracts, to finally hold in my hand published versions of two of my games. I felt young and giddy, as if I was just turning 18 again. Perhaps it had something to do with finally earning the right to vote in the Spielautorenzunft (the international Game Designer’s Guild). And all this just a week before Election Day in the States. 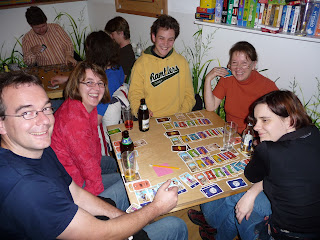 Squeezing a game of Circus Maximus onto a tiny table.

As we introduced and played our new releases, a Japanese television crew weaved its way through the tables and standing-room-only crowd. They were producing a show about the German gaming scene, and Günter was happy to show them a copy of Tokugawa, which has, as its setting, medieval Japan. 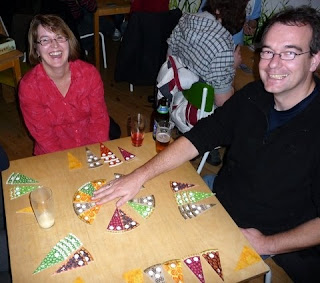 Dividing the pie in a game of Aber bitte mit Sahne

One of the Japanese hostesses of the group thought Aber bitte mit Sahne looked tasty, and asked if they could interview me as well. I asked if I should speak English, and they informed me that the show was all in German because it was an educational program for Japanese who wanted to learn the language. After a pleasant interview in the bright lights with the microphone boom grazing my curly hair, I apologized for all of the Japanese who would now be speaking German with an American accent.