For the first-ever After Essen Party, I was thrilled to have then-Boardgamenews.com editor (and now Board Game Geek News editor) W. Eric Martin and his wife, Linda, as my special guests.  They were joined by Berlin designers Bernd Eisenstein, Andrea Meyer, Thorsten Gimmler, Hartmut Kommerell and Günter Cornett, along with many of the gamers who frequented the Spielwiese in its first year of business.

Following is an excerpt from the article that Eric wrote as a guest columnist for my Postcards From Berlin series on Boardgamenews:
After a break for lunch and (of course) coffee, we headed to Spielwiese, the gamestore/café that Jeff profiled in his August 2007 Postcard from Berlin. We met store owner Michael Schmitt, then broke out my copy of Qwirkle, which I had brought from the U.S. as a present for Jeff. Game designers Andrea Meyer (Ad Acta, Hossa, Mall World) and Thorsten Gimmler (Geschenkt, Gangster) joined Linda and me for a game. Andrea made light of the game, as many do when they first hear the rules for Qwirkle ("That’s all there is to it?"), but Linda and I crushed the two of them, with me barely eking out the win.
Since Andrea’s new game from BeWitched Spiele requires lots of German, we offered to instead play Thorsten’s latest release, Gangster, but Andrea protested, pointing out that she had likely played the game fifity times while helping playtest the design. Instead Thorsten taught us Oregon, the Hans im Glück release from Henrik and Ase Berg.


Don’t pay too much attention to the Oregon name—this game is a European title through and through, not that that’s a bad thing. The Oregon gameboard has a grid superimposed on a landscape, with the grid composed of five columns and five rows; each column and row has an icon (fire, settlers, wagon, etc.) by it, and each space within the grid is subdivided into six spaces.

Players score points during the game by placing meeples next to buildings (which they also place) and collecting gold and coal. To place a building on the board, a player discards a building card from his hand along with an icon card to show in which row or column the building must be placed. To place a meeple, the player discards two icon cards and places a meeple on an empty space where a row/column with one icon intersects a column/row with the other icon. Every time you place a meeple next to a building or a building next to a meeple (whether yours or your opponents), the meeple owner will score points and possibly receive another bonus.
Gimmler, who works for Schmidt Spiele which is distributing Oregon and other Hans im Glück products, had clearly played the game a few times because he cleaned the floor with us, setting up huge scoring plays again and again. Oregon fits the archetype of HiG with its clean game play, modest level of interaction and indirect competition, and attractive graphic design. 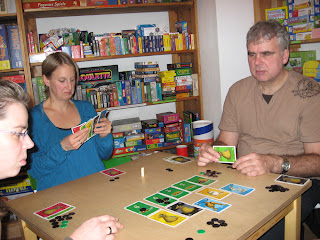 Günter Cornett playing Filou
After Oregon, while Linda played Qwirkle again with Thorsten, Jeff, and Alexander and beat them all by at least thirty points, I played Friedemann Friese’s Filou, which I had played once previously at Spiel. I was eager to see how the game would play with three or four players, but I joined the game as player #5.
Filou is an utterly charming game, and while you can track the cards played by everyone else to deduce with some degree of certainty what others might play, I had fun winging it. The lots that you’re bidding on are revealed bit by bit as the round progresses, and their value can swing mightily depending on a single card. Günter Cornett, designer of Hey! That’s My Fish! and Flaschenteufel (Bottle Imp) and shown at right in the photo above, collected a fantastic clutter of cats to win. As with many auction games, you don’t want to strand yourself without money or else you’ll be forced to drop out of rounds early, which will earn you less money than others and keep you in an underdog position.

Alexander displays our Qwirkle sculpture
Linda and I have tried a lot of Qwirkle variants over the past six months. What we haven’t previously done is create dioramas with the pieces, but they work great for just such a purpose. After finishing their game, Linda, Jeff and Alexander created this scene. Can anyone guess what’s being depicted? (Jeff's hint:  a good place to enjoy Eric's beloved techno music).